I wanted to share a few interesting artifacts from two ZAccess/Sirefef.P compromises I recently had to deal with. In both infections, malicious files were written to hidden sub directories located in the User and System accounts $Recycle.Bin's. Much like other variants of this Trojan, these files were injected into legitimate processes including explorer.exe and services.exe. At first I thought the infection had mucked with the permissions of the hidden sub directories within the Recycle.Bin but then noticed the S-1-5-18 SID, indicating the use of the SYSTEM account.

The first compromise went a step further and overwrote the Wdf01000.sys driver under \SystemRoot\System32\Drivers. I would have missed this if I had not dumped the NTFS Master File Table and used the $SI Entry Date when creating my timeline. By overwriting the existing file, it would appear the other NTFS timestamps were preserved due to File System Tunneling (ref: KB172190 and WIR Blog). A very interesting artifact indeed. 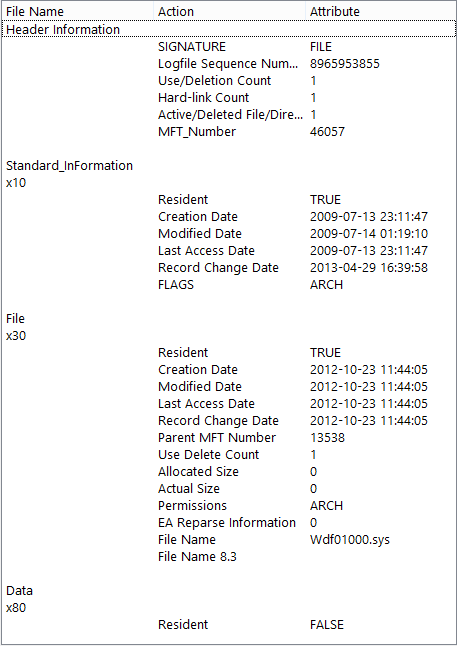 The first variant loaded some typical Fake Antivirus into the C:\ProgramData folder. Nothing new there but with the second variant, I noted the creation of a lot of Internet cache files under \SystemRoot\System32\Config\Systemprofile\AppData in what appeared to be the presence of click fraud.

Overall, a couple of interesting variants that I enjoyed playing with. Here's the hashes for reference.

Happy Hunting!
Posted by Bugbear at 4:53 PM No comments: