I have previously posted about the usefulness of parsing the NTFS Master File Table during static malware analysis.  The Master File Table ($MFT) is only one of the twelve metadata files in NTFS file system however. The $Extend object ($MFT Record Entry 11) is used for optional extensions to NTFS. Beginning with Windows 2000, Microsoft added change journaling ($UsnJrnl) to this list of NTFS extensions. $UsnJrnl is turned on by default in Windows Vista and 7, and records all changes that are made to the file system. It should be noted that changes recorded do not include what specific data changed, rather just the type of change and time stamp of when the change occurred.. This can still be useful however when attempting to establish a timeline of malicious changes to a system.

The $UsnJrnl is stored on the root of the volume in the \$Extend\$UsrJrnl file. The file has two $DATA attributes, the $Max attribute which contains general information about the journal and the $J attribute which contains the actual list of changes. Each journal record varies in size and includes an Update Sequence Number (USN). The USN is 64 bit in size and is stored in byte 64-71 of the $STANDARD_INFORMATION ($SI) attribute of the $MFT.  The following output is an example of the $SI XXD of a file named malicious.dll.

Searching a dd (raw) image for a suspected malicious file called malicious.dll with the The Sleuth Kit (TSK) tool “fls” produces the $MFT Record Number of the file.

The USN, in the above example, represents the byte offset in the $UsnJrnl (remember each record varies in size). It should also be noted that the $Usnjrnl is a sparse file, meaning it has a maximum size but old records are overwritten with zero's and any updates to it will be written to the end of the file and perpetually increase the USN (based on byte offset from the beginning of the file).

Microsoft MSDN has a fair amount of documentation on the structure of the $UsnJrnl $J file and what fields it stores. Additionally, Brian Carrier does a great job of breaking down the data structure and byte offsets in his book File System Forensic Analysis. The following is an example of a $UsnJrnl record structure.

We can obtain the $MFT entry address of the $Usnjrnl $J file by using the TSK "fls" tool (note: the $Extend Object will always be $MFT entry 11).

Once the location of the $J file is obtained, the contents can be displayed by using the TSK "icat" tool as follows. Please note that the -h option skips holes in the sparse file.

A quick search for our "malicious.dll" provides a good example of the structure a $UsnJrnl record. 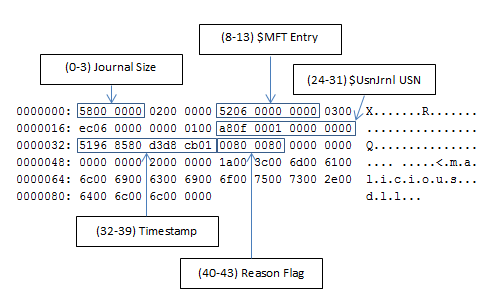 Byte 40-43 is the USN_CHANGE flag and is well documented on MSDN. For reference purposes the following table summarizes the type of flags and their hexadecimal values recorded in the $UsnJrnl. 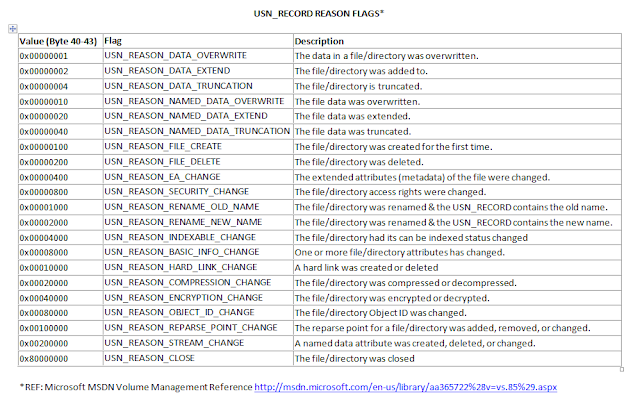 There are a few utilities and scripts available to automate the parsing of the records but for the purpose of this post I am using one I recently became aware of through the Windows Forensic Analysis Email list. The Windows Journal Parser (JP) is available for Windows, Linux, and Mac. JP pulls the allocated clusters from the sparse file and parses the records. Information pulled includes Time/Date of change, File/Folder Affected, Type of Change, and by using the verbose option (-v) it will add the $MFT Entry Number and Sequence Number. JP is able to parse a the $UsnJrnl from a live volume, dd image, or carved $J file and export to a variety of formats.

I recently came across a compromised Windows 7 system and had the opportunity to use JP during analysis. The following is the location, hash values, and Virus Total stats of the malicious (unsigned) process that was found on the system.

After parsing the $UsnJrnl with JP, I searched for the aforementioned malicious process and was quickly able to obtain a timeline of changes made during infection. 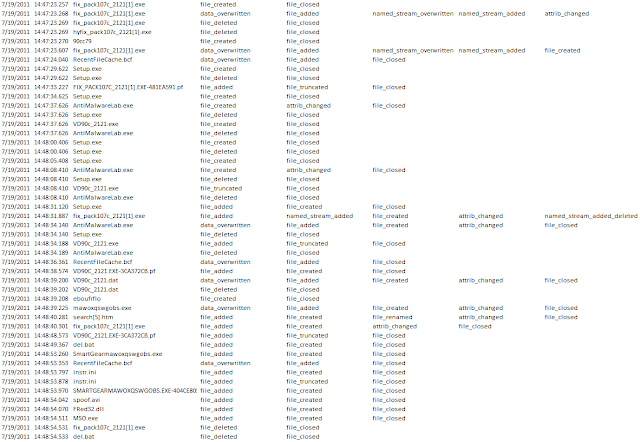 Within a few minutes of analyzing the output from the $Usnjrnl I recognized some of the files and locations created as being similar of a malicious program I analyzed previously last November and outlined here. Hence significantly reducing the time necessary to find the origin, payload, and other infection locations on disk.

It should be noted again that $UsnJrnl records are not going to kept indefinitely. Moreover, if a file is deleted, related $MFT entries may be overwritten. More info on carving old $UsnJrnl records from unallocated space and other $UsnJrnl parsing utilities is posted over at the Forensics From the Sausage Factory Blog. I recommend you check it out.