I recently came across a sample of Renocide which has been circulating for some time now. Microsoft recently published some of its infection numbers on the MSRT blog if you are interested. The malicious code takes advantage of the auto run settings in Windows and spreads via mapped drives and USB storage devices. Virus Total shows decent coverage by the AV industry. While not particularly unique, I did note something interesting when I parsed the NTFS $MFT table during analysis. The malicious code seems to manipulate NTFS $MFT Timestamps on several malicious files it creates in the %windir%\System32 folder. The following screen shot is the $MFT attributes for the process csrcs.exe which the payload creates.


There a few things that struck me about the time manipulation. While it is not unusual to find the $SI born (creation) and modified attributes altered, I have never seen the $FN Born attribute changed. A closer look at the hex values of the $SI Born Attribute revealed something else. 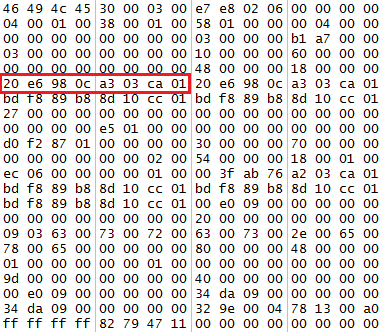 The $SI Born time of "20e6 980c a303 ca01" converts more specifically to 2009-07-13 06:16:55.938000 . The usec value is not zero which is unusual. My first thought was that the date/time values were copied from another file but while the date mirrors other system files, the time correctly coincides with the time of infection. Things that make you go hmm.
Posted by Bugbear at 4:55 PM